from Alcools, by Guillaume Apollinaire, translated by Donald Revel 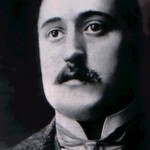 GUILLAUME APOLLINAIRE (1880-1918) was a central figure in the Modernist movement in Europe where, with Matisse, he gave Cubism its name. His books include Calligrammes (1918) and Alcools (1913).

DONALD REVELL is a poet and translator, a Writer-in Residence and Professor of English at the University of Utah, and winner of a Guggenheim and two National Endowment for the Arts fellowships. His most recent Wesleyan book is Arcady (2002), which won the 2003 PEN Center USA Poetry Award.