from The Flowers of Evil, by Charles Baudelaire, translated by Keith Waldrop 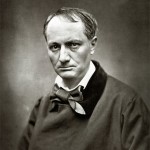 CHARLES BAUDELAIRE (1821-1867) was a central figure in nineteenth-century French literature. His book Les Fleurs du Mal is arguably his most influential and well-known work. His poetry is regarded as one of the most innovative of the time (in Le spleen de Paris (Paris Spleen), published posthumously, he essentially invented the “prose poem”) and he is sometimes hailed as the “father of modern criticism.

KEITH WALDROP is author of numerous collections of poetry and is the translator of The Selected Poems of Edmond Jabes (Station Hill Press, 1988), as well as works by Claude Royet-Journoud, Anne-Marie Albiach, and Jean Grosjean. His titles include Hegel’s Family (Barrytown/Station Hill Press, 1989), The Locality Principle (A V E C Books, 1995), Analogies of Escape (Burning Deck Press, 1997), and Haunt (Instance Press, 2001). He also co-founded the Wolgamot Solciety, and co-edits the small press Burning Deck. The French government has given him the rank of Chevalier des arts et des letters.